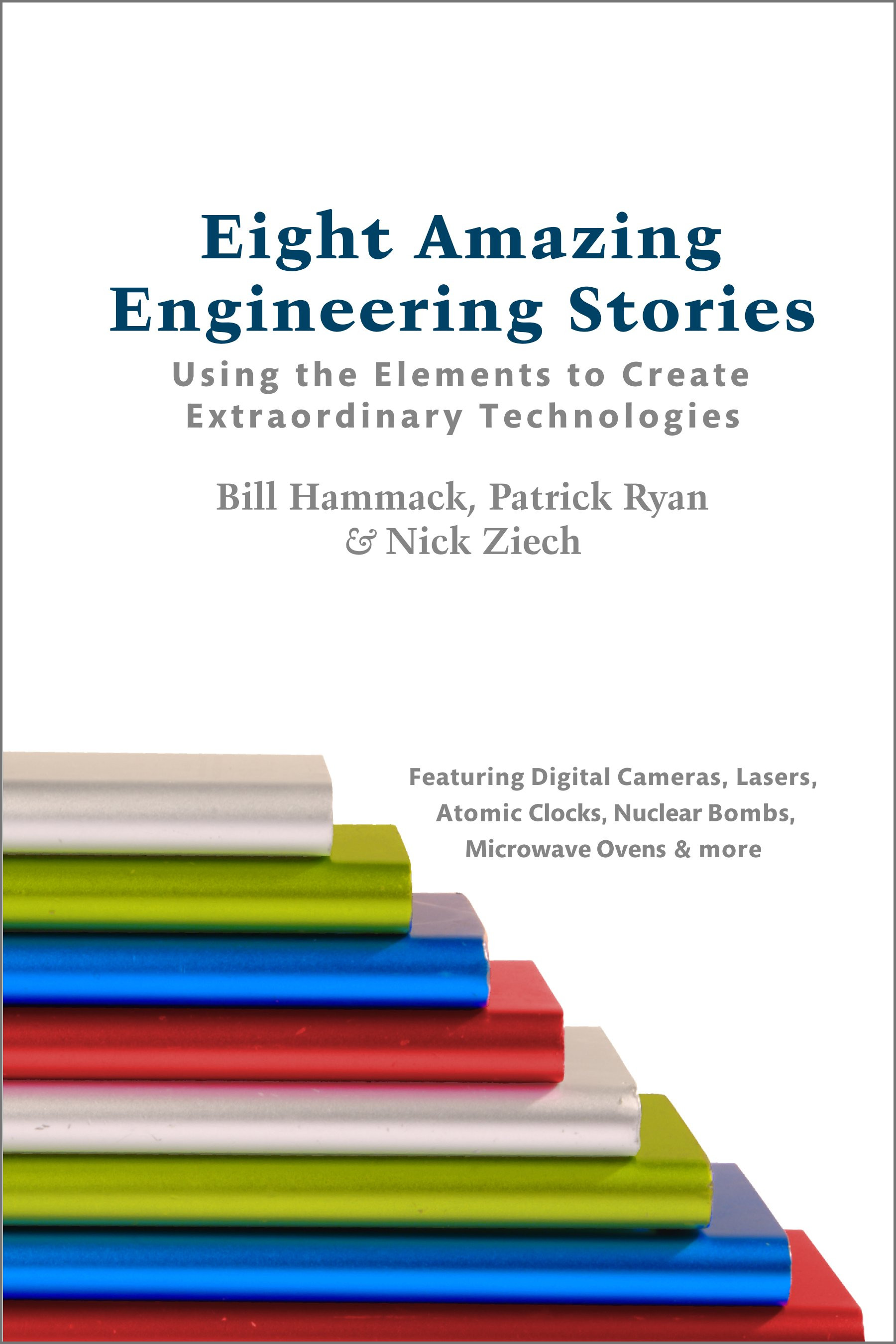 This book reveals some of the stories behind how engineers use specific elements to create the material world around us. In eight chapters, the EngineerGuy team exposes the magnificence of the innovation and engineering of digital camera imagers, tiny accelerometers, atomic clocks, enriching fissile material, batteries, anodizing metals, microwave ovens, and lasers. To help readers of all backgrounds, the book also includes introductions to the scientific principles necessary for a deeper understanding of the material presented in the chapters. The reader will be delighted by primers on waves, nuclear structure, and electronic transitions. It also features “In depth” sections on entropy, semiconductors, and the mathematics of capacitors. You can find out were to buy the book, learn what's inside, or watch the video series — you can also review the book's metadata.

What's inside the book

Digital Cameras: How a CCD Works This chapter discusses how silicon-based pixels use the photoelectric effect to measure light intensity. It covers these topics:

How a Smartphone Knows Up from Down Accelerometers inside many electronic devices - tablets and phones - re-orient the screen as a user moves the device. This chapter opens by using a simple ball and spring device to explain the general principle of an accelerometer. It then describes:

How an Atomic Clock Works This chapter lays out the essential principles and operation of an atomic clock. Specifically, it includes:

The Hardest Step in Making a Nuclear Bomb The hardest step is obtaining isotope uranium-235, which must be separated from uranium-238. The chapter includes:

The Lead-Acid Battery: A Nineteenth Century Invention for the Twenty-first Century The lead-acid battery lies at the center of our technological world: The single largest use of batteries is for starting engines of cars and trucks. This chapter includes:

Anodizing, or the Beauty of Corrosion Apple’s ipod and laptops use gorgeous anodized aluminum. although it looks like a painted coating it is actually an integral layer grown into the aluminum. This chapter reveals how this process works. It includes:

Primer: Waves Many of the objects and processes described in the book depend on the movement of waves. This chapter covers a few basic definitions and principles of waves, including:

How a Microwave Oven Works Microwave ovens exist in nearly every American home, yet few realize that this modern device depends on an older technology: The vacuum tube. This chapter describes the operation of an oven, focusing on how its inner workings create microwave radiation. The chapter includes:

Primer: Electrons, Energy Levels, and Light Emission The final chapter discusses the operation of a laser. This chapter gives the essential details needed to understand its operation. It includes:

How a Laser Works This chapter reveals the essential engineering details in making a laser. It includes:

Companion Videos to the Book

CCD: The heart of a digital camera (how a charge-coupled device works)

Bill takes apart a digital camera and explains how its captures images using a CCD (charge coupled device). He also shares how a single CCD is used with a color filter array to create colored images.

How an atomic clock works, and its use in the global positioning system (GPS)

Bill shows the world's smallest atomic clock and then describes how the first one made in the 1950s worked. He describes in detail the use of cesium vapor to create a feedback or control loop to control a quartz oscillator. He highlights the importance of atomic team by describing briefly how a GPS receiver uses four satellites to find its position.

How a Smartphone Knows Up from Down (accelerometer)

Bill takes apart a smartphone and explains how its accelerometer works. He also shares the essential idea underlying the MEMS production of these devices.

What Keeps Nuclear Weapons from Proliferating: The hardest step in making a nuclear bomb

Bill explains that the hardest step is making the proper type of uranium. Weapons and power plants require uranium that contains a greater amount of the isotope uranium-235 than found in natural uranium, which is mostly uranium-238. He outlines the key difficulty in separating the two isotope: They have nearly identical properties. He explains the two key methods for separation: Gas diffusion and centrifuges.

How a lead-acid battery works

Bill explains the essential principles of a lead-acid battery. He shows the inside of motorcycle lead-acid battery, removes the lead and lead-oxide plates and shows how they generate a 2 volt potential difference when placed in sulfuric acid. He explains how the build up of lead sulfate between the plates will make the battery unusable if it discharged completely, which leads him to a description of how to make a deep cycle battery used for collecting solar energy.

Anodizing (Or the beauty of corrosion)

Bill describes how metals like aluminum and titanium are made resistant to corrosion by growing an oxide layer into the metals. These is the same process used on many Apple products.

How a Microwave Oven Works

Bill details how a microwave oven heats food. He describes how the microwave vacuum tube, called a magnetron, generates radio frequencies that cause the water in food to rotate back and forth. He shows the standing wave inside the oven, and notes how you can measure the wavelength with melted cheese. He concludes by describing how a magnetron generates radio waves.

How a Laser Works

Bill shows how the three key characteristics of laser light - single wavelength, narrow beam, and high intensity - are made. He explains the operation of a ruby laser - the first laser ever made - showing how electronic transitions create stimulated emission to give coherent light, and then how the ends of the ruby cavity create a narrow wavelength highly collimated beam.